According to the American Cancer Society, prostate cancer is the second most common cancer in American men and about one in nine men will be diagnosed with prostate cancer during his lifetime.

Ray Sousa was the one in nine. The 62-year-old Oroville, California resident was diagnosed with prostate cancer in August 2018.

Starting around October 2017, Sousa experienced elevated PSA levels. His primary care physician decided to monitor his numbers and they watched them rise over the next six months until they rapidly increased in April 2018.

“When my numbers took a big jump in April, it really concerned my family physician,” said Sousa. “We decided I needed to see a urologist and it took me until August to get into one. Once I got in, we did a biopsy and one of my samples was positive for cancer.” 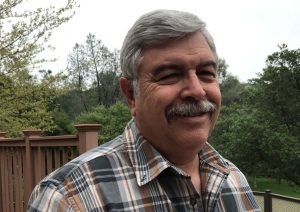 Ray, who had no history of prostate cancer in family, had a Gleason Score of seven, which suggested he was at intermediate risk for aggressive prostate cancer. Treatment was the next step.

When discussing the treatment for his prostate cancer, Ray’s urologist, who was a surgeon, leaned towards surgery.

“I did not want surgery,” Sousa said. “I told my urologist that I would think about it, but if I was going to have surgery, it would be robotic and he let me know that was something that he did not do.”

Not being able to help him with an alternative treatment option, Ray’s urologist sent all his information back to his PCP. The next morning, Ray’s PCP called him and let him know that he had prostate cancer back in 2010 and told him that he treated his cancer with CyberKnife. He shared his experience with CyberKnife treatment, telling him about the short treatment time and noninvasive procedure, and suggested that he consider it as a treatment possibility.

“I had heard that Reno had a CyberKnife facility, so I got online and found it,” said Sousa. “I emailed Lacie (the site manager) and she was so prompt in getting back to me in 24 hours and we began a conversation about CyberKnife.”

Ray instantly requested that his physician send his records to Lacie and he found out the very next day that he was a candidate for CyberKnife and his initial consultation was scheduled.
“I got a call from one of the nurses letting me know that I was a candidate for CyberKnife and they wanted to see me,” he said. “The ball started rolling immediately. It was kind of shocking how fast things started going, especially after I waited almost five months to see an urologist, but I was walking through the doors of Reno CyberKnife after only five days.”

At his Reno CyberKnife appointment, Sousa said that radiation oncologists Jonathan Tay, M.D. and Jaime Shuff, M.D. took their time with him and explained the steps of the CyberKnife treatment process and the roles of the people on the treatment team.

“Dr. Tay and Dr. Shuff were amazing,” he said. “They explained everything in a calm way so I knew what to expect. They prepared me for everything and told me I could call 24 hours a day with any questions I had. They made me feel like family.”

After learning about how CyberKnife was a noninvasive treatment, meaning no surgery, and that the treatments were only going to be five outpatient appointment, Sousa was sold. He also liked that the machine was so precise and that the radiation treatment was going to be pinpointed at his prostate cancer.

Sousa was treated for his prostate cancer November 14 – 20, 2018. He said his CyberKnife treatment sessions were simple, quick, and comfortable.

“My treatments were just 29 minutes a day for five days,” said Sousa. “I didn’t even have to get into a hospital gown. I just sat down in my blue jeans and t-shirt and Trixie (radiation therapist) and the team took care of me.”

Ray also commented that he had several retired fireman buddies that had prostate cancer and after hearing about his treatment, they wish they had known about CyberKnife because they could not believe how easy it was for him.

After his treatments, Ray said he felt good. He was a little tired and experienced some increased urination, but said he was not surprised or bothered by the side effects because Dr. Tay had prepared him for them. Also, Mr. Sousa noted that they were minor side effects and nothing that impeded his daily activities. He said it was back to life as normal after a treatment.

Today, Mr. Sousa says he feels great and is cancer free! At his follow-up PSA this past February, Dr. Tay was extremely excited about his numbers because they went down from 8.3 to 4.2. His next appointment is in August and he looks forward to receiving more encouraging results.

“I am very happy with the decision I made to go with CyberKnife,” said Sousa. “Lacie and the entire team at Reno CyberKnife was fantastic and I’m already recommending it to others facing a cancer diagnosis.”

Speak To A Team Member Today!

Being diagnosed with cancer or having a loved one face the disease can be scary. Reno CyberKnife is here to help. Call our office or contact us with the link below to have a member of our team contact you within 24 hours (Monday-Friday).